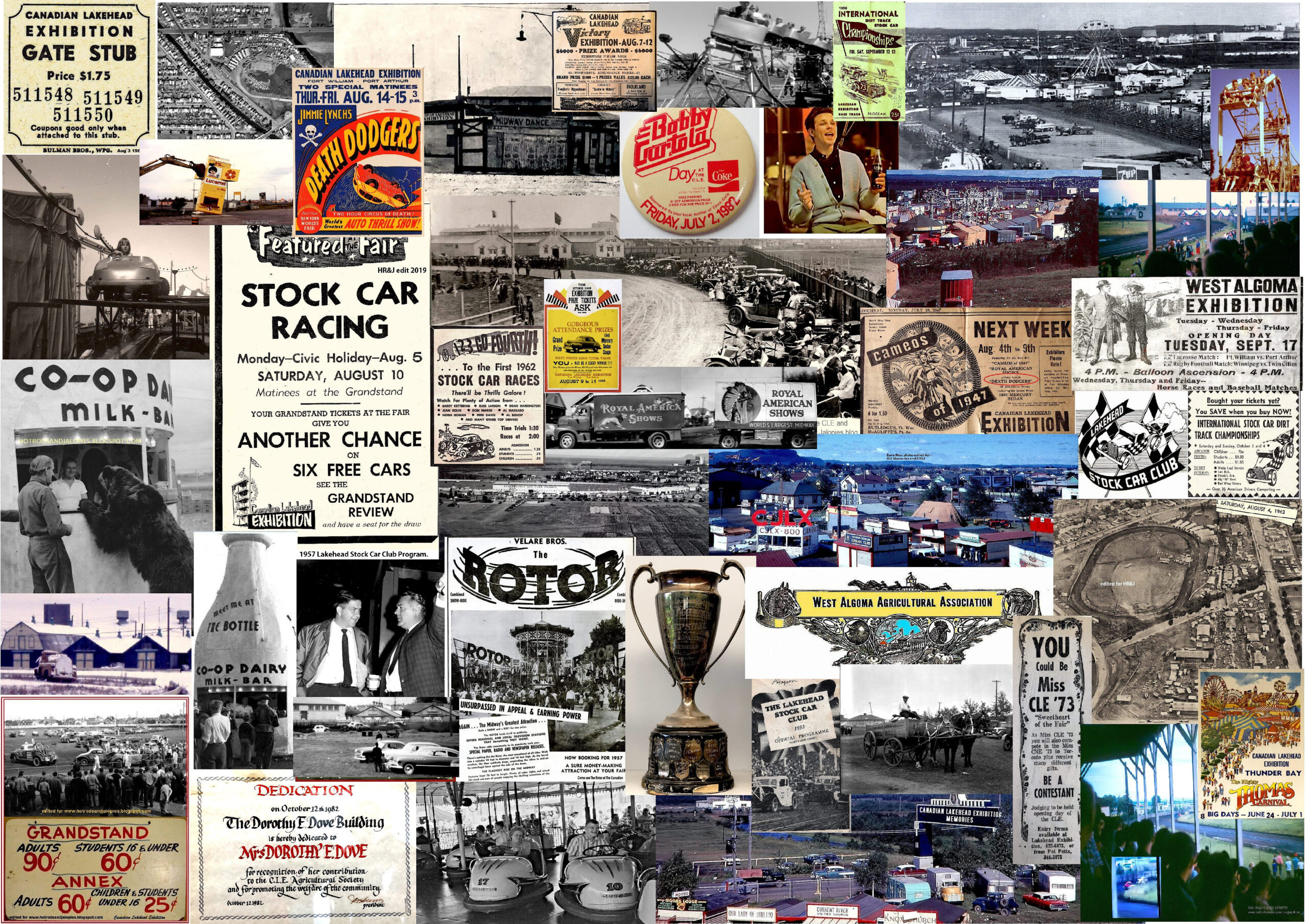 The History of The Canadian Lakehead Exhibition

The Canadian Lakehead Exhibition here in Thunder Bay will celebrate its 131st year in 2021. Our Grounds and Buildings are now home to the Annual Fair which originated way back in 1890. The Canadian Lakehead Exhibition was initially formed as The West Algoma Agricultural Society. This Formation was the result of the efforts of D. F. Burk, a Bank Manager in Port Arthur, and Burt Burris, an Immigration Officer, who called a meeting to discuss the possibility of organizing a Fair for the District. The express intent for an Annual Fair was to bring rural and urban peoples together, to have a meeting place, to exchange ideas, to assist the farming community in creating better crops and in raising better livestock. The thoughts of the day were to hold an annual event showcasing Arts and Crafts, Agriculture, Horticulture and Livestock and also to promote business and industry throughout the area, with their participation in the events taking place at The Annual Fair. It is safe to say that all Fairs had the same ideas in their beginnings.

It was not until 1908 that the Society finally found a permanent home at “Exhibition Park” (Today’s Eastern half of the current Canadian Lakehead Exhibition Grounds). This tract of land was purchased by both the former Cities of Port Arthur and Fort William. Prior to 1908, there were a number of locations used by the Society to host their Fairs including the Port Arthur Waterfront, the Casino Grounds (present day Current River Park) and the Port Arthur Armoury. In the early years, there were more land acquisitions to come, the first being in 1910, when the Society purchased lands to the North (where the southern portion of Intercity Shopping Centre stands today) These lands were eventually sold off.

In 1912 the original buildings needed by the Society to carry on its business of Annual Fairs and other activities were constructed along the Fort William Road side of the newly acquired lands. They included a small Grandstand, two sheep and hog sheds, three large stock barns, (located where the Coliseum is today) the Women’s Home Arts Building, an Office building and an Agricultural building. In 1929 the West Algoma Agricultural Society underwent a name change. After a few years of much debate and at least three choices from which to pick, “The Canadian Lakehead Exhibition” was chosen as the new name for the Society. The Society exists today and still operates under this new name.

In 1934 with the acquisition of lands to the West, it was decided to move the Agricultural Hall, the Agricultural Office, and the Women’s Home Arts building over to the May Street side of the grounds. 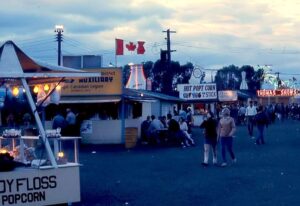 What a feat that must have been! The Women’s Home Arts Building now known as the Dorothy Dove Building still stands there today. The old Agricultural Hall has since been demolished due to fire and the office used for many years as the St. John Ambulance building which sat next to the Auditorium building has since been moved back to “Exhibition Park” where it is now known as the Kiwanis building. 1939 was another very active year. The lands to the North were acquired to extend the property to Isabel Street. Construction began anew with a bridge built over the McIntyre River to access the far northern reaches of the property. The 1939 updates also included the erection of a much larger covered Grandstand, the building of a Superintendent’s home next to the Women’s Home Arts building on May St. and construction of six new livestock buildings, (some of us will remember them). It was at this time that the entire property was fenced in. In 1946 the small parking lot on Northern Avenue was also acquired. 1949 became another huge year for the Canadian Lakehead Exhibition. The go ahead to construct both the Coliseum (sitting in the same location that some of the 1912 buildings once stood) and the Auditorium building was given.

On September 27, 1952 The Lakehead Stock Car Club began racing on the ½ mile dirt track originally constructed for horse racing although there is proof that there was automobile racing on the original horse track as far back as the teens. Racing continued there until 1966. The Judges Stand area across from the grandstand was also used for high class entertainment throughout fair week each year.

There are also other buildings in use on the grounds. The Claydon building was built in the early 1960’s and stands next to the Scarnati building (the former Shop). In the early 1990’s our present day Maintenance Shop was purchased from an adjacent commercial entity.

In the years 1997 into the 2000’s the Canadian Lakehead Exhibition grounds received a complete overhaul. The barns of 1939 were torn down and replaced with The SilverCity Movie Theatre.

Our mini park became the home to the brand new Heritage Building. The Dorothy Dove building was winterized and made available for year round use. The grounds were paved, our infrastructure was upgraded and the Golf Dome later turned Sportsdome was inflated (no longer standing after a devastating snow storm in 2017). This period also saw the demise of our Safeway Milk Carton structure, which had been built to replace the iconic Co-op Milk Bottle (the Meeting Place for family and friends at the Fair). “Meet Me at the Bottle” will always be remembered by those of a certain age.

This is only a very small part of the storied history of the Canadian Lakehead Exhibition…there will be more to come.